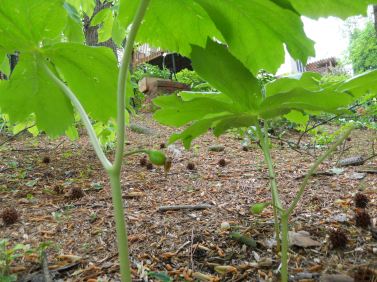 The Mayapple has several other common names:  Hogapple, Indian Apple, Mayflower, Umbrella Plant, Wild Lemon and American Mandrake.    It will appear before the forest canopy emerges but will then slowly goes dormant during the summer.   This is another plant you need to enjoy while it is “active” and give it a space in the shade and label it with a plant marker because it is dormant for about eight months each year.   It is in the Barberry family.   Shoots are often connected by rhizomes.   The flower it produces provides sexual reproduction but the rhizomes provide asexual reproduction.   The flower provide for a wider dispersal and the rhizomes promote cluster growth.   The apple ripens later in the summer.

The Cherokee used the plant as an emetic, a medicine to promote vomiting, as a cathartic or a stool softener, and as an antihelmintic to treat worms.    They would also boil the poisonous root to be used as a cure for stomach aches.

Mayapple roots have several joints from years of growth.   The Cherokee would not used the root joints because they were poisonous.   The parts of the root between the joints were used for medicine.

It flowers in May from a fork in the stem and produces an oval lemon colored fruit that is ripe during July and August.     Mayapple has large leaves so you need to look on the underneath side to see the actual flower and the resulting fruit.

We showcase this plant in our lower garden.   We originally had only two Mayapples but now we have a nice cluster of about ten.     Give it space so it can propagate naturally.