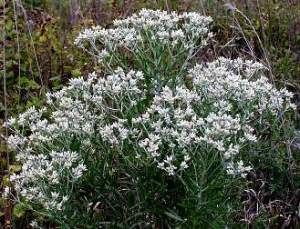 Sweet Everlasting is also know as Rabbit Tobacco and False Cudweed and is in the Aster family.  It can grow up to three feet high and two feet wide.   Its small white flowers bloom in August and September here in Georgia and reproduces by seeds only.   It can take over eight hours of direct sunlight a day and likes well drained to dry soils.   For this reason this plant is often found in the edges of meadows or along tree lines in the sun.    As Sweet Everlasting nears its maturity the upper stalks and leaves change from green to pale gray.

The Cherokee name for this plant means “ash like” because the aerial parts of the plant have a white ash color that goes with it’s white flowers.   The Cherokee would make a bitter tea (from the aerial parts) that was sweetened with sugar or honey.   They would use this tea to treat colds and flu and it was also used in the same manner as a preventive for colds.  They would make a effective astringent from the leaves.

The reason that it’s common name is Sweet Everlasting is the fact that in the fall the plants would be harvested and dried and hung in their cabins as an air freshener.   Another common name is Rabbit Tobacco.   In times past, many young people would try to smoke the leaves when tobacco was not available.