Also known as Jerusalem Artichoke, Sunroot and Earth Apple.    The Cherokee would boil the Sunchoke tubers, make a tasty soup or eat them raw.  The tubers have the texture of water chestnuts and taste very similar.   Documentation shows the Cherokee cultivated them as far back as the 1500’s.   The tubers contain 10% protein and about 76% carbohydrates.   It is in the Sunflower family and is native to the eastern portion of the United States.    Today it is also used to make brandy and other spirits.

It is a  perennial that can grow from 4 to 10 feet tall.   It should be noted that this plant can be invasive if not harvested.  Sunchokes will grow in a variety of soil types but prefer fertile sandy loams.    In good soil fertilization will be optional.   Planting should be in the spring after any chance of frost.  Tubers with two or three buds or “eyes” should be planted.  Be careful when cultivating because tubers can be close to the top of the soil.   Since the stalks 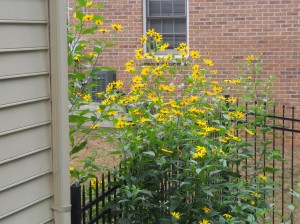 can be quite tall, you may need to stake the plants.    The tubers which can reach 4 inches in length and 3 inches in diameter in August.   They can be harvested after the first frost.

One thought on “Sunchokes –Helianthus tuberosus”